A renowned attorney with an active national law practice catering to clients in the bodybuilding, fitness and dietary supplement communities, Rick Collins is the country’s foremost legal authority in the area of performance enhancing drugs (PEDs) and supplements, having defended cases involving steroids, human growth hormone, peptides and other anabolic substances from coast to coast. His firm is the most well-known legal team in the sports nutrition field, and assists clients worldwide on regulatory and legal issues related to dietary supplements and natural products. Rick currently serves as President of the Nassau County Bar Association.

An accomplished author – helping others accomplish their goals in health and fitness.

Working Tirelessly  to Help Others, Change Laws … and Help Give People a Second Chance

Going to New Heights, and Pushing Himself to New Limits, As He Embraces Adventure

Stepping outside of the courtroom and onto the stage in celebration of his acting roots.

Rick Collins, Esq. is a founding partner of the Long Island-based law firm of Collins Gann McCloskey and Barry, and a former Nassau County Assistant District Attorney.  Awarded the highest accolades for legal abilities and ethical standards (AV-rating) from the prestigious Martindale-Hubbell directory of lawyers, Rick is listed in the Bar Register of Preeminent Lawyers.  He serves as the official legal advisor to the International Federation of BodyBuilders (IFBB) Pro League and is also General Counsel to the International Society of Sports Nutrition. He served as part of the United States Sentencing Commission’s working group on guideline issues relating to performance drugs.

In addition to his longtime work as a lawyer in the dietary supplements industry and his role as the foremost legal authority on anabolic steroids and PEDs, Rick is a popular author, fitness authority, actor and former competitive bodybuilder/fitness trainer who has become one of the nation’s most celebrated personalities in the men’s health and fitness arena.  His co-authored book, Alpha Male Challenge, has revolutionized the men’s fitness arena — and Rick has become a sought-after expert on the subject of men’s health and physical performance.

Rick has been interviewed as a legal authority on performance enhancing substances in the film “Bigger, Stronger, Faster” (2008) and on national television talk and news shows, in talk radio interviews and by countless online and print publications, including USA Today, ESPN.com, The New York Times, the Washington Post, the Los Angeles Times, the Village Voice, the Salt Lake Tribune, Newsday and Reason magazine. His practice and accomplished career have been profiled in periodicals as diverse as the prestigious New York Law Journal and the popular MuscleMag International and he is currently a blogger for the Crime section of the Huffington Post.

Rick is known nationwide for his groundbreaking work in men’s health, for his leadership in the area of performance enhancing supplements and the law, for his efforts to give a “second chance” to deserving Americans who’ve been through the criminal justice system, and for his philanthropic work in “going to new heights” to raise nearly $100,000 for cancer research by skydiving as an international fundraising event.  He continues to be one of the country’s most recognized lawyers and writers in the health and fitness community.

To learn more about Rick’s law firm, visit www.cgmbesq.com. To get a message to Rick, send an email to him at rcollins@cgmbesq.com or call his staff at 516-294-0300 during business hours, eastern time. 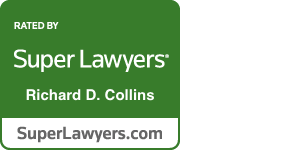