Working Tirelessly  to Help Others, Change Laws … and Help Give People a Second Chance 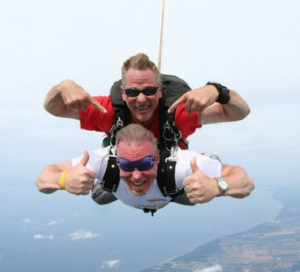 Rick Collins is a long-time advocate, and activist, who has worked for decades to help fight to protect people’s rights and personal freedoms.  Whether working to change the law in New York State to give deserving reformed ex-offenders a second chance through the sealing of their criminal records, to jumping from a plane at 13,500 feet to raise awareness, and funds, for the fight against cancer, Rick does more than talk about the causes close to his heart.  He does something about them – and has provided help, and new hope, to the lives of so many through his actions.

As an outspoken activist, Rick has:

Rick has been a tireless advocate for people suffering from the employment, education and financial roadblocks caused by a long-ago, non-violent criminal conviction. He has worked hard to help change state law in New York to offer tens of thousands of New Yorkers the opportunity to have their criminal records sealed -- allowing them to move forward without the stigma of a criminal conviction on their records. Rick’s efforts played a critical role in the passage of a new law (which went into effect in New York on October 7, 2017) that makes criminal record sealing in New York a reality, and is now giving so many people with past criminal records a clean slate -- and a second chance in life.

As a longtime legal trailblazer in this area of the law, Rick served as the Co-Chair of the New York State Bar Association Criminal Justice Section Sealing Committee and the co-author of the committee’s Report and Recommendations to conditionally seal certain low-level criminal convictions in New York. His committee’s report was adopted by the New York State Bar Association and the Nassau County Bar Association, and endorsed by Nassau County District Attorney Kathleen Rice. The bill passed by the Legislature in October 2017 evolved in part from the report, making history by changing the law regarding the sealing of criminal records in New York State.

Rick’s efforts and work in this area have received a great deal of attention in both the legal community and the media, with stories appearing in The New York Law Journal, The Wall Street Journal, The New York Times, Long Island Business News, Newsday and other local and national media outlets. To read more about the new record sealing law, go to www.NYSealinglaw.com.

After losing a relative and two close friends to cancer, Rick wanted to do something to try to make a difference – and has “gone to new heights” in his efforts as an activist in seeking to raise awareness, and funds, for cancer research.  In 2009, he overcame his fear of heights and created “Leap for Life” – skydiving for a cause, and raising more than $15,000 on his own for the American Cancer Society.  Rick  continued to grow the annual event into a nationwide cause –  orchestrating a multi-city skydiving Leap for Life national fundraiser and raising more than $75,000 for additional cancer organizations (including LiveSTRONG (www.livestrong.org),  Alex’s Lemonade Stand (www.alexslemonade.org) and Strength for Life (www.strengthforlifeny.org).

Rick’s role as the creator of Leap for Life – and his role as an activist in the fight against cancer – has made news around the country … and has changed the lives of many who were helped by his efforts.  For more information about how Rick has gone to new heights in the fight against cancer, and to see some media coverage of Rick’s work (as well as a video of his most recent jump) click here.

For years, Rick has worked in many charitable endeavors within the community – delivering coats and meals to the homeless through his frequent participation in New York City’s Midnight Run and working to help various charities throughout the region.  Rick was recently appointed to serve on the Advisory Board of the WE CARE Fund, the nationally-recognized charitable arm of the Nassau County Bar Association which helps raise funds to improve the quality of life for children, the elderly and others in need throughout Nassau County.

Rick Collins, the activist.  Providing a voice for those whose voices often go unheard in the community – and providing the help, and hope, that can change so many lives.